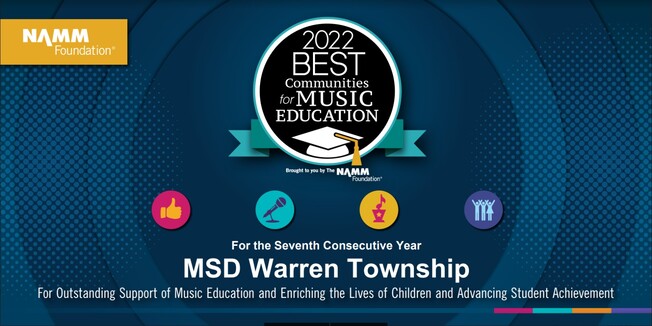 ​There are ALWAYS Performing Arts Opportunities for Warren Intermediate and Middle School 5-8 Students!

VIEW OUR COURSES ​HERE
and contact your counselor to Be Part of the Performing Arts!

Are you a color guard director? We have COLOR GUARD COSTUMES FOR SALE

​Giving is simple and takes just a moment of your time. Your donation goes to providing support for the operational costs of our many student programs and scholarships that will keep students performing. This effort is vital to the success of our organization and helps provide an incredible experience for Warren students. Give your gift today!
Welcome to the Warren Central High School Performing Arts Department. Warren Central is an educational institution that can trace its beginnings in Indianapolis back more than a century. The high school was built in 1924 to consolidate the overcrowded Shadeland and Cumberland Junior-Senior High Schools. In 1983 the township built the Warren Performing Arts Center, adding over 116,000 square feet of creative, technical and rehearsal space. Along with the Walker Career Center, Warren Central High school boasts over one million square feet and serves approximately 3,600 students under one roof.

Since 1983-1984, Warren Central High School has been officially recognized as a "National School of Excellence" and an Indiana Blue Ribbon School. Individual students consistently win awards in academic and performance competitions; championship-caliber music programs and athletic teams have been the rule, not the exception. In 1999 Warren Central was honored as a Grammy Signature School and the music program earned Grammy Signature Schools Semi-Finalist recognition from 2006-2014. Music ensembles have 27 appearances at the Indiana State School Music Association (ISSMA) Organizational State Finals since the 1980s.

The Metropolitan School District of Warren Township is an urban school district located on the east side of Indianapolis. The school system serves approximately 11,500 students from kindergarten through twelfth grade. Within the district there are nine elementary schools, three intermediate academies, three middle schools, one high school and an alternative school. The township also includes an early childhood center and a career center.


​​Thank you for supporting the Warren Central Performing Arts Department.